Skip to content
Home Tech Nearly half of women in IT are not programmers.

Almost half of women in IT are not programmers

No Fluff Jobs – Polish portal with IT ads – on the occasion of International Women’s Day, for the third time in a row, analyzed the situation of female IT professionals and candidates for work in the industry. From the report “Women in IT 2022“The survey shows that ⅔ of female professionals have been working in the IT sector for less than 5 years, and already 46% of. women hold positions not directly related to programming – most of them are testers and project managers. Interestingly, only 27.5 percent. of the surveyed have graduated from IT studies. Most respondents are people after the change (55%).). Among them there is a predominance of those who have previously completed studies in the humanities or social sciences.

The most tempting are salaries and opportunities for development. Soft skills as a ticket to a career in IT

What makes women want to work in IT? As the No Fluff Jobs survey showed, mainly female IT candidates are concerned with the possibility of expanding their skills and development in a particular field (71%).), but also about the salary (71%).). For many of them, however, entering the industry is difficult – as many as 75% think so. female candidates for IT jobs. 40 percent. of women indicate that they do not know where to start, a similar percentage is not able to find a job offer that suits them, and every third respondent admits that she has a problem with choosing the right specialization.

And what skills do female IT professionals already working in the industry find most useful? As it turns out, to a large extent it is the ability to work in a team (as much as 92%). indications). The ability to solve problems, in turn, was indicated by 86 percent. The most desirable among candidates for a job in this sector is Design (13.6% of surveyed women, while analytical skills – 82.

– From the data Eurostat for the years 2013-2019, Poland is the European Union leader when it comes to the number of female graduates of science subjects (STEM) per one thousand inhabitants (there are over 320 thousand future female specialists aged 20-29). This is a positive and encouraging data, but the IT world is open not only for women with technical education – says Magdalena Gawlowska-Bujok, co-founder and COO of No Fluff Jobs. – According to our survey, 46% of female IT specialists. Women working in this sector hold positions not directly related to programming, such as. project manager. This may be a motivation for women who would like to enter the IT industry, do not have a specialist degree and do not necessarily want to program, but have developed soft skills. And these, as it turns out, are according to female IT specialists the most useful in working in the industry. 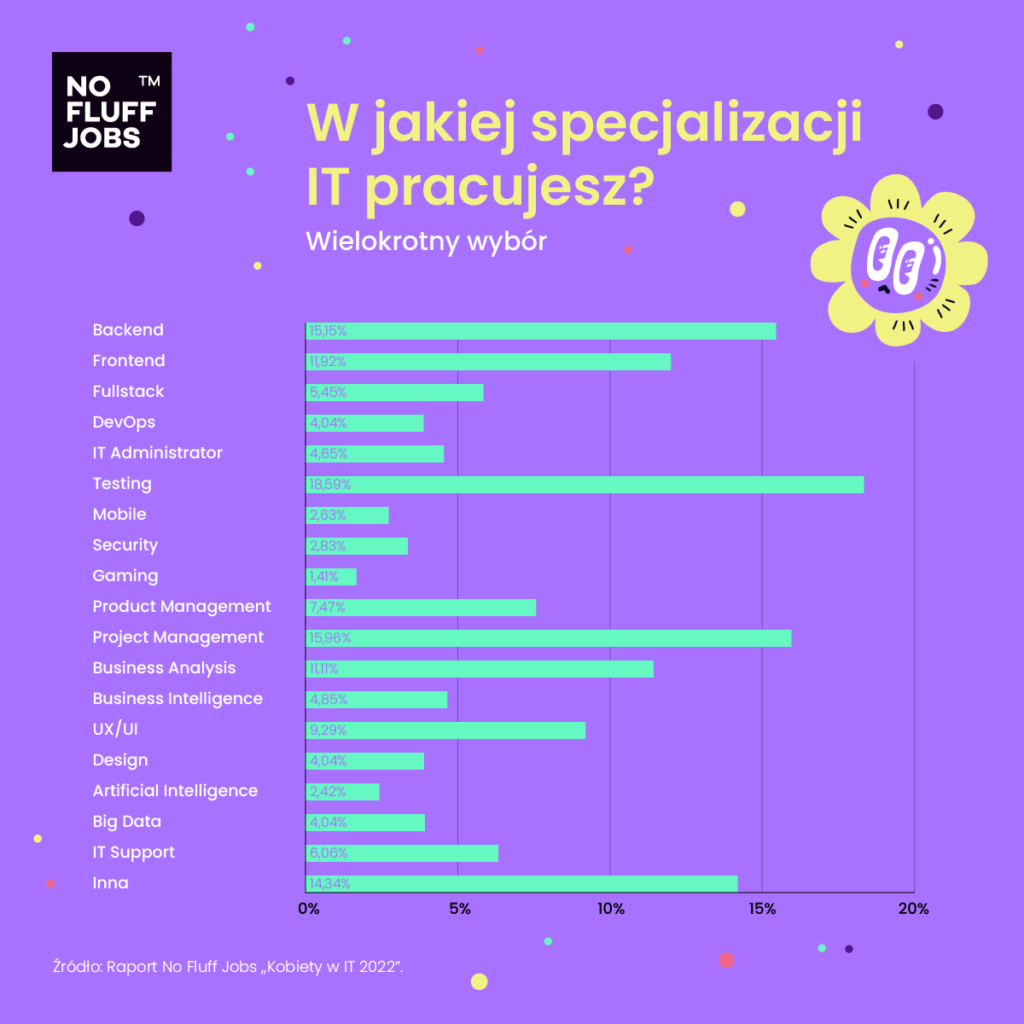 Specializations and technologies popular among female IT specialists and candidates

The survey conducted by No Fluff Jobs shows that more than half of women working in IT are involved in coding. And in this case the largest percentage of them specialize in Backend (15 percent.), Frontendz and Fullstack (5.4 percent).). Some respondents also indicated DevOps and Big Data – 4% each., as well as Security (2.8 percent), AI and Mobile – 2.4 and 2.6 percent, respectively. When asked about what technologies they work with on a daily basis, almost 30% indicated SQL, slightly more than 20% – SQL (71%), and slightly more than 20% – SQL (71%). JavaScript, 19.3 on HTML and CSS, and 15 percent. for Java.

– All these data show how versatile are the Polish IT specialists and how wide is the spectrum of specializations that they represent –says Paulina Król, Head of People & Operations at No Fluff Jobs. – In the “female” IT there is no single dominant branch, which gives a good chance to get into the industry to representatives of different professions. Looking at this picture from the perspective of the challenges IT companies are currently facing, the emergence of more women in the industry could quickly help fill the current staffing gap and provide a new perspective on recruitment processes.

Job satisfaction, promotion opportunities and raises according to female IT professionals

Polish female IT professionals praise work in the technology sector and recommend it to others. 68 percent. In 2021, women in the industry received a raise, and 3/4 of them indicate that in the current company they have a chance for promotion.

As the most important factors that shape the positive perception of the industry, the surveyed female IT specialists indicated development opportunities (88.4%).The respondents pointed out, among other things, to poorly designed website or application navigation (29%), poorly designed website or application (29%).) and the openness of companies to allow them to work remotely (77.7%).). 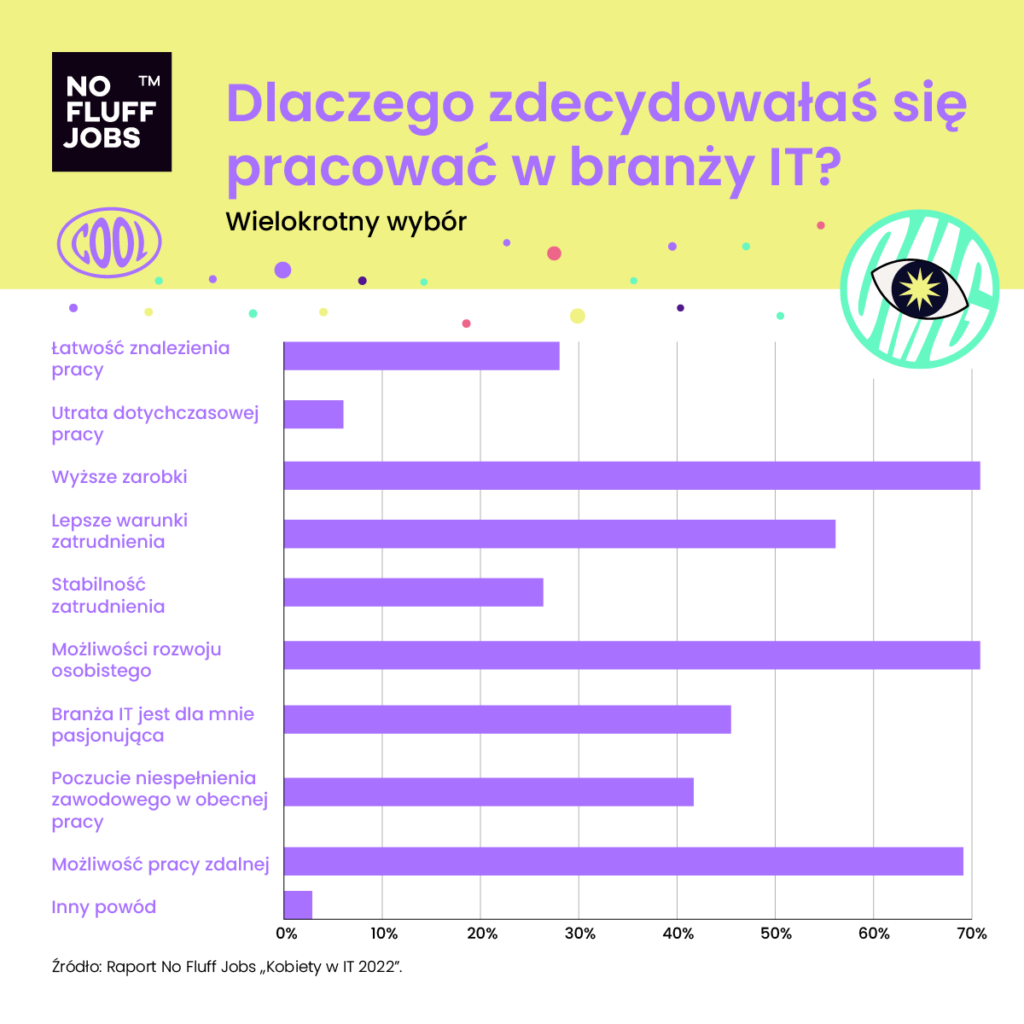 – The IT industry offers women great opportunities for development, so it is no wonder that they are more and more willing to enter it. As our survey has shown, female IT professionals enjoy working in this sector, influenced not only by exposure to new technologies, but also by things like the opportunity to move up the career ladder and learn new skills –says Magdalena Gawłowska-Bujok, co-founder and COO at No Fluff Jobs.

The survey was conducted between Jan. 1 and Feb. 28, 2022, with a sample of 959 respondents working in IT and planning to work in the industry.